Start preparing your party plans, for in no less than four months it is the anniversary of Turkmenistan’s late President-for-Life Saparmurat Niyazov’s first term in office. President Niyazov, a modest celebrity and inspiration to us here at ReverseColonoscopy, is well known for humble quotes such as “I watched young dogs when I was young. They were given bones to gnaw to strengthen their teeth. Those of you whose teeth have fallen out did not chew on bones”. His wisdom was unparalleled.

To exemplify his people’s, and indeed our love for him here is a final quote:

“I’m personally against seeing my pictures and statues in the streets… But it’s what the people want”. Rest in RIP glorious leader. May your reign extend into the afterlife. 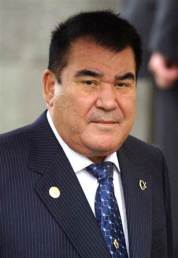 The unspecified Birmingham Man underwent surgery for a broken clavicle after an accident involving a lawnmower, three grams of cocaine, Tom Daley, and the neighbourhood badger, but complications arose and he slipped into a coma. Hours later his heart stopped, but he was successfully resuscitated minutes later and is now recovering. He claims that he underwent a unique second reawakening and is now a “level 3 Christian” and “able to wield archangel-type weapons”. Unfortunately, we have no proof of this, but I for one take his word for it.

ReverseColonoscopy’s Natural Science department with an extensively funded employee base of Volunteer Dave with a grade B in GCSE geography and applied science, and Volunteer Rob- Dave’s dog, have made a startling discovery. Evolutionary biologists have been searching for the so called “missing link” in human evolution for upwards of a century, but our very own Volunteer Rob might have just cracked it. On a rhinoceros tracking expedition in Liverpool, which has so far proved unfruitful, Rob noticed that many pub-going Liverpudlians smelt unusually different from average homo sapien sapiens; human beings that is.

Upon closer inspection and totally voluntary probing we noticed a plethora of biological differences between Liverpudlians and regular human beings, for example Liverpudlians have very undeveloped vocal cords similar to that of a gibbon. The rest of the UK politely nods and laughs whenever Liverpudlians speak, but what we previously thought might have been an accent is now discovered to be a completely different vocal range. Scientists around the world have been facepalming now that after the initial discovery nothing could seem more obvious. 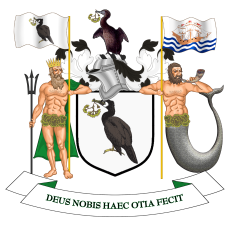 With a coat-of-arms like this presumably made in Microsoft Paint, how could we have not known? The figure with the horn on the right is believed to be an early Liverpudlian. The language below is so far unknown.

Liverpudlians are confirmed to be the missing link between our ancient ancestors and the modern humans we are today. Scientists are continuing to work on this newly discovered information.

One of ReverseColonoscopy’s journalists in happenstance came upon a gruesome image etched onto the pavement, showing what must have been a horrific accident mere minutes beforehand. It seems that a pastry, perhaps a chicken and stuffing pastry at that, had slipped from someone’s grasp and ended up chalked onto the floor in a graphic facsimile. While it seemed to have been eaten regardless, someone, somewhere, must have had a day ruined beyond belief. We can only pray, be it for or against the wishes of the pugs, for the lost soul that day. 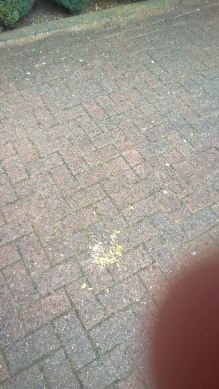 -KD (the one that has legible grammar)